Thus says the Lord:
A voice is heard in Ramah,
lamentation and bitter weeping.
Rachel is weeping for her children;
she refuses to be comforted for her children,
because they are no more. Jeremiah 31.15


Since George Floyd was murdered, days of protest have accrued into weeks.   There is a cumulative anguishing cry of a people demanding that something be different.  As Sam Cooke sang "A Change Is Gonna Come."  It has to.  It must.

There are efforts by some to categorize and demonize those protesting in the streets.  That is done only for one purpose, to further marginalize their voices so as to perpetuate the status quo.  There's a different energy in the air these days.   Unprecedented events in unprecedented times call for unprecedented outcomes.

The number of people who look like me now able to proclaim that Black Lives Matter indicates the beginnings of a change of some import.  It's a change whose time has come, but a change that wouldn't have were it not for video cameras on mobile devices.

There's something about observing someone with his knee on someone's neck that does a thing.  That's especially so when the one doing it has his hands in his pockets as life is pinched off.
So yeah, there's the beginning of a change.  To be sure, it's not the whole of a paradigm shift, but it is the beginning.

Of this be clear, the principalities and powers that have built a system of racism and bias will not go quietly into that good night.  Persistence is key.   Simon Sinek's quote has resonance:

For folks like me, white folks, what is our place?  What's our role?  What do we do?  How do we engage in something we may not fully understand.  What are we willing to fight for?

Quite simply, before engaging in the fight for change, we white folks need some training.  We need a whole lot of understanding.   We are in no position to determine what needs to happen.

This learning is not merely an intellectual exercise.  It was in the academy that I first learned from James Cone's writings that white folks are in no position to drive the train.  So let's not try.

You may have seen this video.  I commend it as a point of beginning for white folks.  It's Emmanuel Acho's "Uncomfortable Conversations With a Black Man."  It's real.  It's honest.  It addresses questions that you may have asked.  You may not like the answers to the questions, but we can no longer fain ignorance.  It's powerful.
Follow this guy.  Ask your questions.
For all the names we are asked to remember, to remember not to forget,  let's learn and come to understand that what we're fighting for is something/someone we love.  Let us refuse to be comforted with what's happening in the world as well as what's happening inside each of us as we allow ourselves to be confronted.
Posted by Johnny Jeffords at 9:08 PM 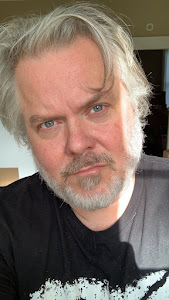